Flirting with Disaster: An Analysis on the Demand for Religious Freedom in Malaysia

When Hishamuddin said that it was gonna be resolved in a matter of days....
I knew he didn't know what exactly he was getting himself into....
Now that the chips have been laid out.......how do you think he would act?

MARCH 30 — We are grateful to Almighty God for bringing together Christian leaders from across churches in Semenanjung, Sabah and Sarawak to address the current controversy surrounding the impounding of Bahasa Malaysia Bibles, the Alkitab, at Port Klang and Kuching. This decision weighs heavily on us because of the implications not only for Christians but for all Malaysians.

We are united in our reaffirmation of the freedom of religion and worship. Therefore, our position is that there should be no restrictions, proscriptions or prohibitions whatsoever on the bible or the use of the language of our choice in the practice of our religion, as it was in the days before and after the formation of Malaysia.

Christians, like any other Malaysian, are not demanding for anything beyond our constitutional and fundamental human rights as enshrined in Article 11(1) of the Federal Constitution and Article 18 of the Universal Declaration of Human Rights.

The current controversy surrounding the Alkitab is just one of many issues that concerns Christians. There has been a systematic and progressive pushing back of the public space to practise, to profess and to express our faith. For example, the wearing and displaying of crosses and other religious symbols, the use of religious words and the construction of places of worship have been restricted.

When Christians express this concern, we do so not just for ourselves but on behalf of all Malaysians. Our faith forms a critical component of our identity as Malaysians in nation-building as enshrined in the first pillar of our nation’s Rukunegara: Belief in God. More here

Bishop Ng Moon Hing since you've stated your position allow me to share with you why I have been consistently pushing forward a message that your actions especially of the Catholic's Church action is the wrong way to go...
To begin let us understand and compare among other countries how Religious Restriction is employed, what is the level of control and what kind of impact it has on the Social Harmony...
The first ever quantitative report was published in 2009 by the Pew Forum

For more than half a century, the United Nations and numerous international organizations have affirmed the principle of religious freedom. For just as many decades, journalists and human rights groups have reported on persecution of minority faiths, outbreaks of sectarian violence and other pressures on religious individuals and communities in many countries. But until now, there has been no quantitative study that reviews an extensive number of sources to measure how governments and private actors infringe on religious beliefs and practices around the world.
Global Restrictions on Religion, a new study by the Pew Research Center's Forum on Religion; Public Life, finds that 64 nations - about one-third of the countries in the world - have high or very high restrictions on religion. But because some of the most restrictive countries are very populous, nearly 70 percent of the world's 6.8 billion people live in countries with high restrictions on religion, the brunt of which often falls on religious minorities.

Among all regions, the Middle East-North Africa has the highest government and social restrictions on religion, while the Americas are the least restrictive region on both measures. Among the world's 25 most populous countries , Iran, Egypt, Indonesia, Pakistan and India stand out as having the most restrictions when both measures are taken into account, while Brazil, Japan, the United States, Italy, South Africa and the United Kingdom have the least.
The Pew Forum's study examines the incidence of many specific types of government and social restrictions on religion around the world. In 75 countries (38%), for example, national or local governments limit efforts by religious groups or individuals to persuade others to join their faith. In 178 countries (90%), religious groups must register with the government for various purposes, and in 117 (59%) the registration requirements resulted in major problems for, or outright discrimination against, certain faiths. More here

As someone who is quantitatively driven in my readings, I find the report extremely valuable for me to put forward my point of view on the matter...(you may download the full report here)
Refer below a chart mapping the Relationships between Religious Restrictions and the Social Hostilities in the country surveyed. 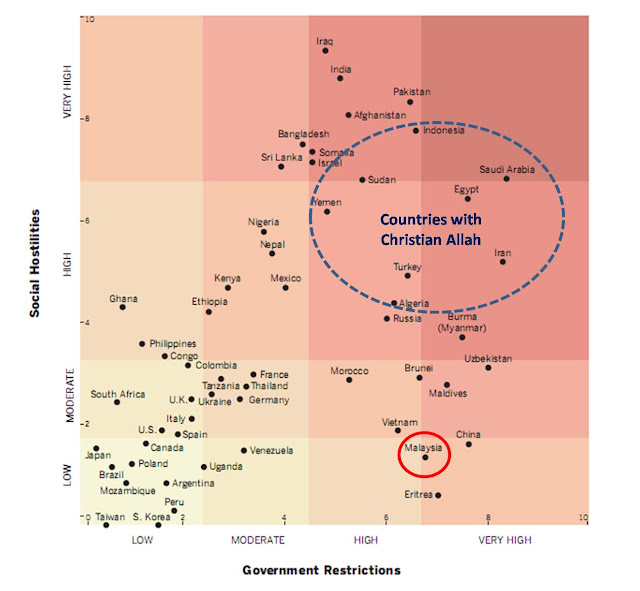 Malaysia is considered as a country with a very high government restrictions but surprisingly the ONLY Muslim Majority Country with Low Social Hostilities
Compare that with other Muslim Majority Countries....
Just look at the higher quadrant circled in Blue...these are the countries with Arabic Allah usage in the Bible
How do they fare?
For those who've been using Egypt as a reference case of Allah Usage...
Do you know how Christians are treated in Egypt?

The survival of the church in Egypt has also been hampered by the 1856 Ottoman Decree that is still in force which prohibits the construction or repair of churches, including the repair of a toilet, without a presidential decree. While mosques are allowed to flourish, the construction of non-Muslim places of worship are curtailed. In January 1998, President Mubarak transferred his authority on issuing building permits to the regional governors. It remains to be seen if the granting of permits by the regional governors will have any significant impact. Most Christian pastors interviewed by ICC remained skeptical. Restricting church construction has been used by the government as a means to limit church growth, and such restrictions have been encouraged by the Muslim leadership.

Another great frustration to Christians is the government-issued identity card. From the time of birth, every Egyptian citizen is issued an identity card that states his or her religion. The card will either state Muslim or Christian. If one has a card bearing the identity of Christian on it, they are discriminated against in terms of jobs, and many things similar to the 1960 civil rights offenses toward African Americans. Non-Muslims may change their identity to read "Muslim" but Muslims are not allowed to change their identity to read "Christian." Moreover, there are no restrictions on non-Muslims converting to Islam, but Muslims face serious legal problems and social pressure if they convert. While there have been no recent charges brought against converts in the past two years, previously the government has used provisions in the penal code that prohibit falsifying documents as a means to punish converts who attempted to change their religious affiliation. A common charge that had been brought against converts cites the penal code violation that prohibits religion to "ignite strife, degrade any of the heavenly religions, or harm national unity or social peace." More here

You can't even fix your church toilets without getting approval.

Lets not go into more gory details on their sectarian violence


And these people are all Arabs....

This brings me to another unique position that Malaysia is in....the plurality of our society

When Egypt erupted, some folks were jumping on the bandwagon that Malaysia runs a similar risk... 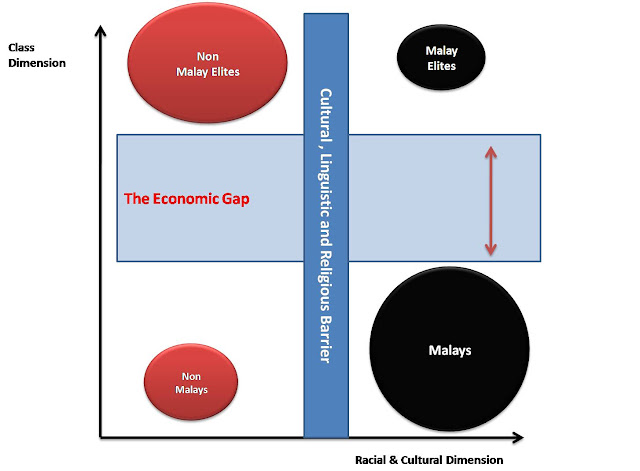 A Malay can Covert to Christianity and be free to Profess, Practice and Propagate Christianity under the guarantees of our Article 11 go here

In that post as well I referred to a possibility that if there is a significant conversion of the Malays to other religion, more specifically Christianity that would be tantamount to an Act of War against the Yang Di Pertuan Agong

Following the hidden rule of the statutory interpretation of Art.3.is the protection of Islam as the religion of the State and the YDPA as the Supreme Head of the religion of Islam is well protected against any aggression, subversion or propagation against him, his government, his agent, his Muslim subject, his heir and his state by instigating any Anti Islamic activities.

Thus, could it be that if such a new situation arise Penal Code s.121 could be used because any aggression instigation against His Majestic official religion of the state is an act of aggression against his Majestic and thus it is wagging a war against the YDPA as defined in s.121 of the Penal Code (Act 574).

I believe we are at an initial tipping point now.....

Hidden hands are operating in shadows.....

Just look at the timing of the Al-Kitab issue, how convenient.... after quite sometime they suddenly brought it up as a potential political capital for the Election in the Christian Majority Serawak....

All of a sudden a flurry of support from the Pakatan Rakyat on the subject....

Eerie silence from BN camps on the matter....not only that every single move they make it leads to another hole....

Let me ask you a simple question...

The Restrictions on the Usage of Allah and other "Islamic" words are enforced via the State Enactments rite?

Refer Article 11.4 of our Federal Constitution

State law and in respect of the Federal Territories of Kuala Lumpur and Labuan, federal law may control or restrict the propagation of any religious doctrine or belief among persons professing the religion of Islam

Ask yourself how long have PAS ruled Kelantan with considerable Majority

Why didn't they change the State Law if they really support the Usage of Allah?

What about Pakatan ruled Selangor and Kedah?

If you really support its usage

I DARE YOU TO CHANGE THE STATE LAW

Which Quadrant in the Religious Restriction Vs Social Hostilities do you want our Country to Migrate to?

It would be nice to go to the bottom left....
But is there any Muslim Majority country there? Realistic move?
Today I have choose to put aside my standard pukimak lancau mak lu because I don't want folks to get turned off after my second paragraph.....but since we're at the end of my post...what the heck
I would like to say pukimak lancau mak lu to all Muslim Bloggers who got distracted with the Anwar Sex Tape issue...focus people focus!! ke takde sape nak bayar duit kat lu?
Put it up on the fucking youtube please...use the lingam move...the dude who took the picture never came forward until the court of public opinion have decided that Lingam is guilty......you show your cards too soon...how can you gauge public opinion on the subject when only a few have seen the video.....bodoh punye move
And I would also like to extend the pukimak lancau mak lu to all the Politicians who are capitalising on this delicate issue
By the way Christian Federation of Malaysia do consider this as a potential solution the situation that we are facing...
Another Shiite by satD at 3:26 AM
Email ThisBlogThis!Share to TwitterShare to FacebookShare to Pinterest
Newer Post Older Post Home
Minds are like parachutes; they work best when open. -Lord Thomas Dewer