Much Ado about National Reconciliation

Since I announced the government’s plan for national reconciliation, I have been touched by the reaction of the Rakyat who have expressed their very strong support and encouragement for a more cohesive and united Malaysia. The National Reconciliation Plan will be unveiled and implemented over the next few months and I will provide more details soon but I want to share a bit of what is to come.

I am sure most of you recall that immediately after GE13, I was the first to call for national reconciliation while others were only concerned with questioning the legitimacy of the elections, which has been proven to be completely baseless. It was not an idle call. After months of quiet work on it, we are now almost ready to implement our plan of action.

The NRP will aim to encourage an environment that is conducive and promotes National Reconciliation through unity and consensus across the country. What we want to do is to help inspire the rakyat to respect and reconnect with one another so as to make Malaysia a better home for all of us.

The Opposition and various groups have made suggestions on how we should proceed and I thank everyone for their input, which will be considered. The NRP will help steer the course of national unity in this country and I invite everyone to continue supporting the government’s initiatives.

The NRP is based on the principles of RESPECT, WORKING & PLAYING TOGETHER, and the spirit of give and take. This should underpin all that we do. For a start, we want the rakyat to start sharing stories on acts of kindness between races and this includes the mainstream and online media as well as social media users. For example, sharing a picture of a Malay policeman helping an old Chinese lady cross the road helps to reinforce what we already know but have forgotten, that we are all part of a Malaysian family.

We must also discourage the spreading of reports on actions taken by extremist groups and organisations that tend to destroy the trust between races. You know that what these extremist groups are doing and saying on social media sites are wrong, so should we share such views online? If you want to preserve the harmony of this country, don’t let these instigators overpower us! Even better, don’t pass on news of such incidents as it is almost certain to incite fear and hatred.

Do not give these extremists the publicity they crave. If no one reports on their actions, they will not gain the recognition they want. They will not be able recruit more people to their cause. They will fail. But it comes down to us. We don’t have to condemn them, just ignore them. Don’t give them the airtime or the publicity.

Our grandparents understood this and have been doing this for decades but we appear to be paying less attention to this today. If you want a better nation, if you want to have your faith restored in one another, then take the steps needed to do it.

Once you do this, it will not matter who says what or which group makes silly demands, because you will know how you, your neighbours and by extension, how most Malaysians feel. If we feel united as a people, these extremists, regardless of who they are and what they do, will get no traction. Destroy them by having faith in yourself and your fellow Malaysian. (here)


Well Sir, I beg to differ, none of the things that you're yapping above actually makes any sense. Nada...who wrote that piece for you anyway.


I'm trying to make some sense into this Nat Reconciliation Plan thinggy. Ni apekebenda la pulak. What is it that we r trying to RECONCILE?
— satD (@satD) February 25, 2014


I clearly remember you on National TV muka mengelabah talking about "Chinese Tsunami" and the need for National Reconciliation....that night clearly shows how little you knew about the mindset of the Chinese in Malaysia. Now you want to talk about "extremist groups and organisations that tend to destroy the trust between races" and goes on to say that "we" should know that their actions in wrong and should not give them the necessary airtime nor share their "activities".....just IGNORE them....

Have a moral high ground and brush aside all this "information"

How bout this instead...what if your Government starts to properly enforce all the relevant laws in this country to all this Cyber Activity.

(a) by means of any network facilities or network service or applications service knowingly — (i) makes, creates or solicits; and (ii) initiates the transmission of, any comment, request, suggestion or other communication which is obscene, indecent, false, menacing or offensive in character with intent to annoy, abuse, threaten or harass another person; or
(b) initiates a communication using any applications service, whether continuously, repeatedly or otherwise, during which communication may or may not ensue, with or without disclosing his identity and with intent to annoy, abuse, threaten or harass any person at any number or electronic address, commits an offence.


Take for instance the Chua Lai Fatt incident back in May 2013, where DAP Election Strategist and his side kick the Social Media Strategist unleashed the locust into the Social Media claiming that An Adopted Indian with A Chinese name is a fraudulent voter. 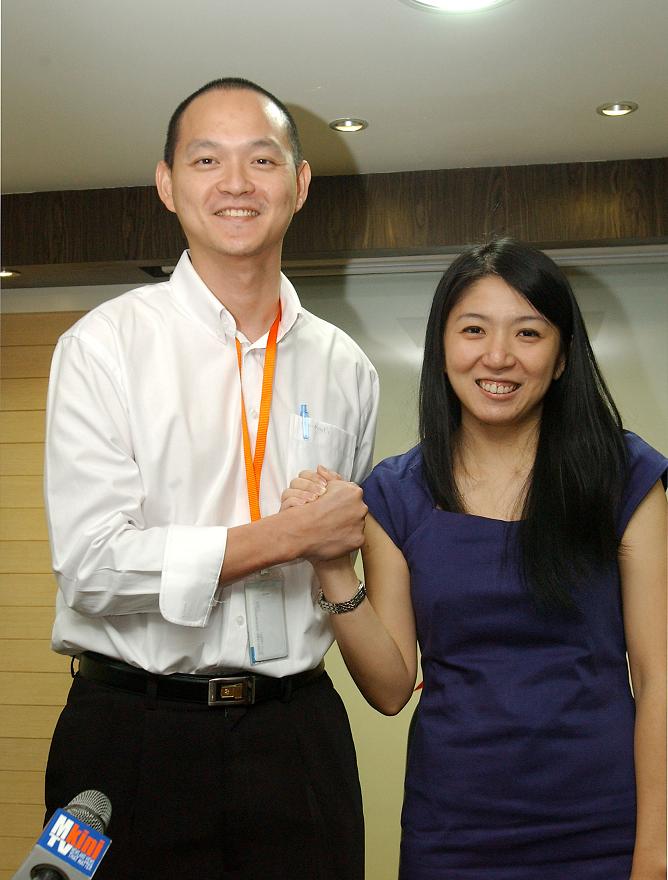 Its a total shame cause his friends actually went online to provide a validation to his identity and actually requested for the postings to be taken down. No effect.....their voice was DROWNED in the cyber noise

Even the Election Strategist admitted (here)

Mr. Chua did not look Chinese based on his IC photo which was widely circulated online


Widely circulated online....let me guess Mr Chua actually scanned his IC and started this whole thing? Or was it the DAP FASCIST polling agents?  Lets find out...

PETALING JAYA : The Malaysian Indian voter who was mistaken for a phantom voter because of his Chinese name will not lodge a report with the police or the Election Commission (EC) over his ordeal. Chua Lai Fatt, 30, said he bears no ill feeling towards the Pakatan Rakyat “phantom-busters” who picked on him. The construction worker from Sungai Pinang, Klang, who made news on polling day for an unenviable reason, told Nanyang Siang Pau that he was initially angry when someone made a fuss at the polling station over his status and tried to stop him from casting his ballot. However, he told the reporter who took two days to locate him that he did not fault DAP for the misunderstanding. “Initially, I thought those who tried to block me from voting were Barisan Nasional supporters,” said first-time voter, who is a DAP and Rela member. “I only realised that the DAP people had mistaken me for a foreign worker and a phantom voter when friends told me what actually happened.” Chua, who managed to vote but not until he signed a statutory declaration at the polling station and had his MyKad photographed, said he thought the drama ended after casting his ballot. Unfortunately, it did not stop there as he was flooded with calls from friends who saw the picture of his MyKad being circulated on Facebook not long after returning home. (here)

Got statutory declaration and IC being photographed...

Not clear Bengs....still blur about what happened?

Wanna know what happens next after his IC picture was taken.... 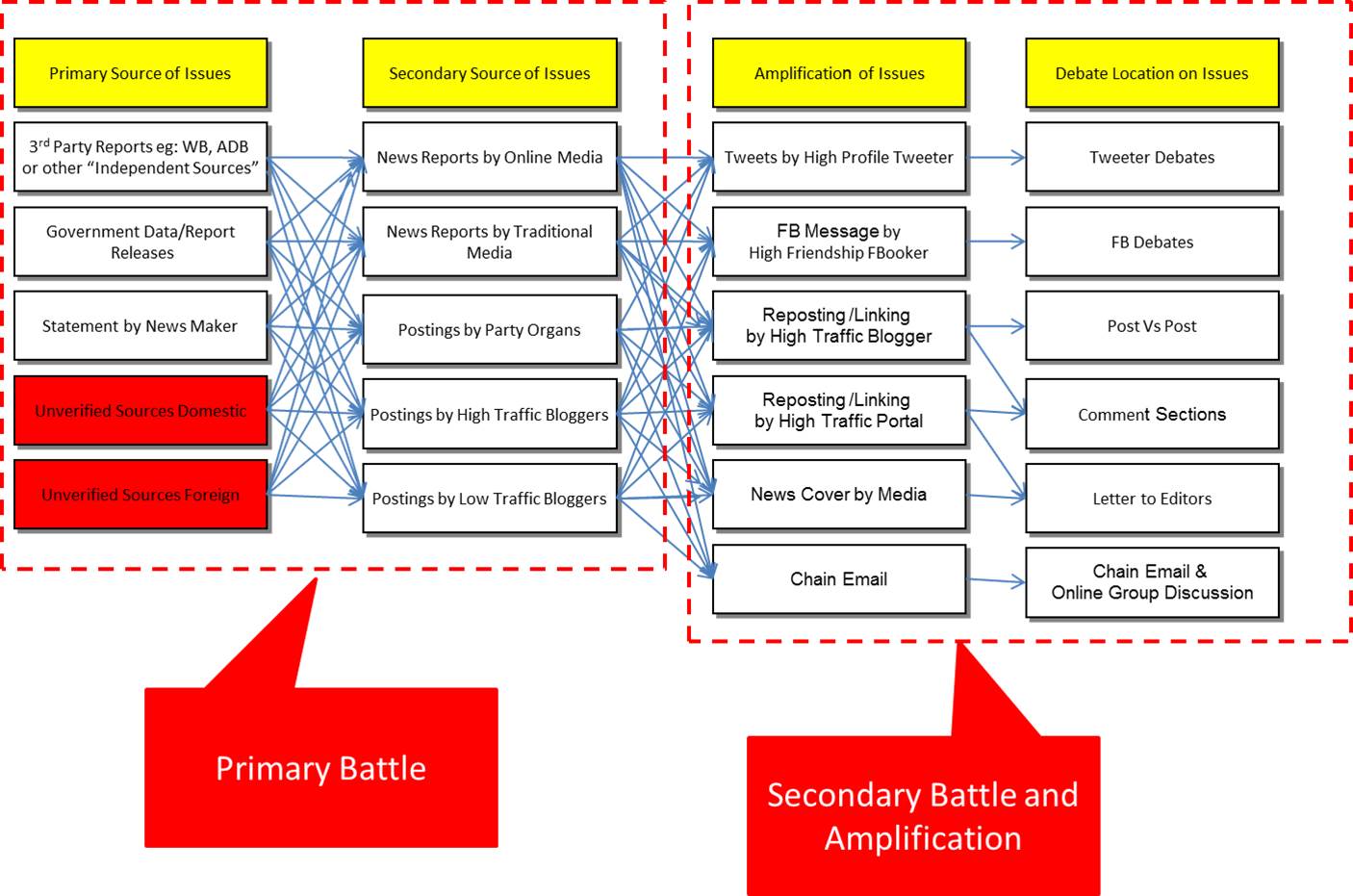 The image of Chua's IC would then be sent to DAP's War Room for onward distribution....pretty clear case don't you think? Wonder what happened to his Statutory Declaration?

Can we track where the information originated?

Can we intervene to provide the counter and validated information?

How Mr Najib? Got a clue....let me indulge you with another of your example on "extremist groups and organisations that tend to destroy the trust between races"

Why can't we use existing tools?

Not sure which one?

I think the Rakyat would like to see proper enforcement being conducted in cyberspace....

If the "Even Tempo" of Society is now being affected why can't the Government steps in pre-emptively to mitigate the risks?

Instead you go on yapping about National Reconciliation?

What National Issues Do we Need to RECONCILE?

With whom are we trying to reconcile with?

Do you have a clear Term of Reference of Our National Reconciliation?

I hope its not this

For a start, we want the rakyat to start sharing stories on acts of kindness between races and this includes the mainstream and online media as well as social media users. For example, sharing a picture of a Malay policeman helping an old Chinese lady cross the road helps to reinforce what we already know but have forgotten, that we are all part of a Malaysian family

Allow me to bring back an old framework that talks about our class dimension and the HUGE Cultural, Linguistic and Religious (CLR) Barrier that we Malaysians face. 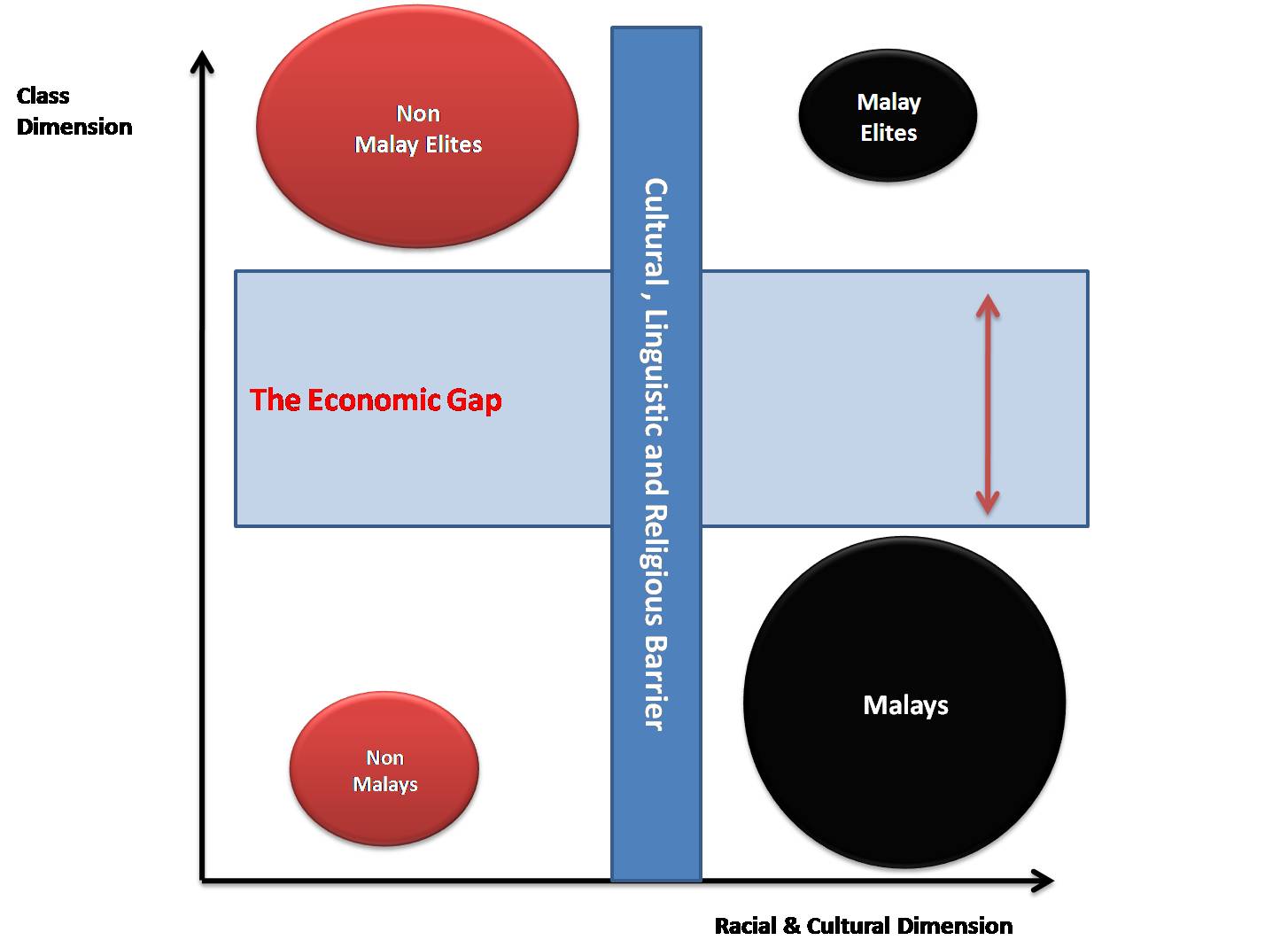 When I first put forward that post, it was to highlight the lack of Unity that can mobilise the masses to bring down the government via an Arab Spring type of movement (here), there I highlighted that the CLR Barrier is widening over the years and at the same time the Government must manage the Economic Gaps to reign in any possible unrest (Most social unrest are fuelled by economic issues refer below)

The Opposition is smart enough on how to prick the CLR Barrier to their advantage and at the same time attacks the Government Economic Policies claiming that this will widen the Economic Gaps (For a sampling just look at their GST campaign & TURUN movement). From a distance it could be seen that they are trying to build the perfect scenario for a ground swell against the Government.

Another factor that we need to consider is the Level of Trust..that should be the BASE OF OUR NATIONAL RECONCILIATION....as it is the situation look kinda grim....

Well I wonder what is your plan Mr PM on improving the TRUST DEFICIT?

Can't wait to hear the details...in the meantime he cajole us to take the "steps"


If you want a better nation, if you want to have your faith restored in one another, then take the steps needed to do it.

Globally we are at the bottom of the scale when it comes to trusting one another....

So Mr PM what steps do you want us to take?