Is IDEAS running out of IDEAS?

KUALA LUMPUR: Institute of Democracy Economic and Social Affairs (Ideas) Chief Executive Officer Wan Saiful Wan Jan today called for the revisiting of the position of Islam and the Malays in the Federal Constitution as it had began dividing instead of uniting the society. Since Article 153 safeguarded the special position of the Malays and natives in Sabah and Sarawak, and with article 3 stating that Islam was the official religion of the federation, the government had been reiterating that one group was superior and overemphasising on Islam. In the light of that, the Prime Minister Najib Tun Razak had announced on Saturday the latest economic plan, Bumiputera Economic Empowerment Agenda (BEEA), to provide a bigger slice of the economic pie to the Malays and natives of Sabah and Sarawak. “Hopefully, the articles can be removed in 10 to 15 years,” Wan Saiful said when he spoke on how the clauses in the federal constitution affected the balance of power during a forum entitled, “Fifty years of democracy: Has it weakened or strengthened our federal constitution.” (here) 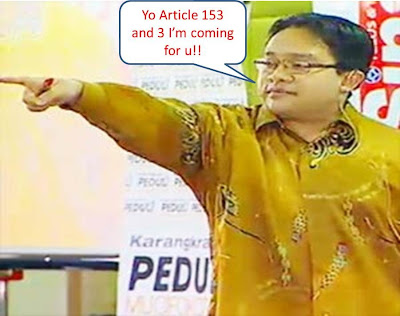 Why dont you check this piece of Law first dude 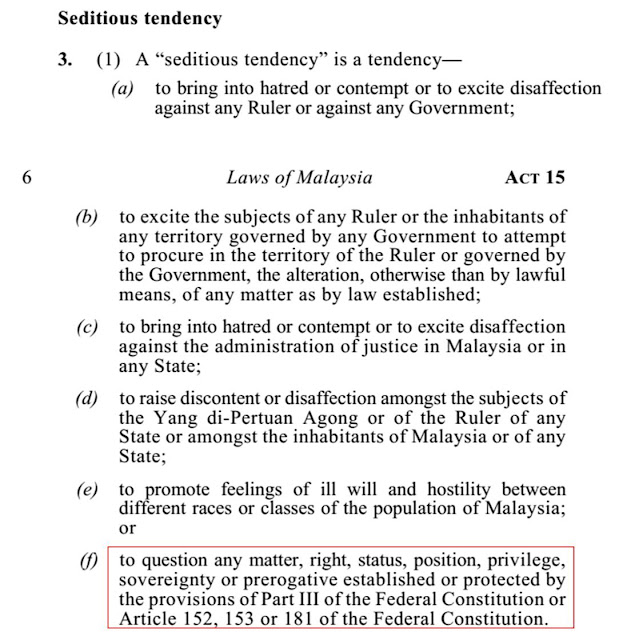 Were you echoing what was said before?


In an immeasurably important and remarkable work by Dr. Joseph M. Fernando of the Universiti Malaya, based on records that have recently become publicly available at the Public Records Ofﬁce in London under the United Kingdom’s thirty-year rule, he recounts the history of the special position clause from the Alliance Memorandum, through the Reid Commission’s deliberations and the tripartite talks between the “Malay” United Malays National Organization (or “UMNO”), the “Chinese” Malayan Chinese Association (“MCA”) and the “Indian” Malayan Indian Congress (“MIC”), to the ﬁnal insertion of that clause in the “permanent” part of the Malayan Constitution of 1957. According to Dr. Fernando, the special position clause was initially the subject of inter-ethnic compromise at the Alliance Memorandum phase where there was agreement within the Alliance (principally the Malay UMNO under the leadership of TunkuAbdul Rahman, and the ChineseMCA led by Tan Siew Sin) that the Malay special position should only amount to a transitional measure to assist the Malays economically. Likewise, the Reid Commission resolved to insert that clause only in the “temporary provisions” part of the draft Constitution, thereby requiring a two-thirds majority to preserve it after 15 years while bolstering fundamental liberties, achieving a compromise on multi-linguism with Malay being the “ofﬁcial” language (but that Chinese and Tamil should be used “exceptionally” in the legislature for ten years, leaving Parliament thereafter to decide on this), and by not specifying an ofﬁcial religion.

At this juncture, there was controversy within the Reid Commission caused by the dissent of Justice Abdul Hamid of West Pakistan. At issue was the liberal approach taken by the majority of the Committee members, which would have the Malay special position clause phased out in time as had been agreed in the Alliance Memorandum. Justice Hamid’s genuine concern that special protection accorded to the Malays could be eroded if not more ﬁrmly entrenched spurred him on to lone dissent.Eventually, Hamid was persuaded by the other members to withdraw his dissent.

However, during the “tripartite talks” (the Working Party negotiations under the chairmanship of Sir Donald MacGillivray) between the UMNO, MCA and MIC the “special position” clause was removed and placed in the “permanent” part of the Draft Malayan Constitution, thus in radical reversal requiring (instead) a two-thirds majority in Parliament for its subsequent amendment or removal. What is curious is that the MCA representative had apparently not grasped this last legal implication of moving the “special position” clause to the permanent part of the Draft Constitution.

Remember the Guy who stood up for all of us? Justice Abd Hamid

6. It is one of the terms of reference of the Commission that the new Constitution should include provisions for  "the safeguarding of the special position of the Malays and the legitimate interest of other communities". A safeguard in the same language exists in Clause 19 (1) (d) of the Federation Agreement of 1948. Recommendations for a safeguard of this kind were made by the Alliance Party and the Rulers in their memoranda submitted to the Commission.

7. The Commission has agreed to insert certain safeguards relating to the special position of the Malay in Articles 82 and 157 of the draft Constitution and all that is required to be seen in whether the safeguards embodied in these articles are in accordance with the recommendations of the Alliance.

8. The two provisions stand on a different footing in their effect. As regards to the special quotas for the Malays (Art 157) the quotas in existence on 1st January 1957, are to continue for a period of 15 years. After the expiry of that period a Committee shall be appointed to review the position and after such a review Parliament can by law reduce or discontinue the quotas then in existence if it so chooses. In the case of Malay reservation (Art 82) no law adversely affecting Malay reservation can be enacted unless the law is passed by the majority of the total number of members of the State legislature and also by majority of not less than 2/3 of the members present and voting

9. In my opinion special quotas of the Malays under Article 157 should either be made the special responsibility of the Yang Di- Pertuan Besar in respect of matters which are within the legislative competence of the Parliament, and of the Rulers of the states in respect of matters which are within the exclusive legislative competence of the State Legislature, as the Alliance unanimously recommended, or a provision on the lines of the proviso to Article 82 should be inserted in Article 157 as well, so that the Special quotas of the Malays may also be alterable by Parliament only if Parliament takes a decision by a majority of the total number of members of each House and by a majority of not less than 2/3 of the members present and voting. The safeguards in this case should be in line with that provided in Article 82. If any at any time the Malays or those who think that it would be unjust to abolish the quotas are in the minority in Parliament then the special quotas mentioned in Article 157 will be subject to abolition by a bare majority of the members.

10. My suggestion in this connection are as follows:

if the special quotas mentioned in Article 157 are to be the special responsibility of the Yang Di Pertuan Besar and the Rulers, the the following changes should be made-

(a) A provision to the following effect should be inserted in the Constitution as Article 157A:

(2) In the discharge of the aforesaid special responsibility of the Yang Di Pertuan Besar or, as the case may be, the Ruler or the Governor may take such action and make such provision as he may deem fit, and no such action or provision shall be invalid by reason of the fact that it is contrary to the provisions of any Federal and State Law

A provision like this will be in conformity with the position obtainable under the Federation Agreement 1948. It will also be in accordance with the recommendations of the Alliance


And his efforts lead to the Safeguard Clauses.....covered under Art 159 of Our Constitution...


So lets say la your backers (which is PR of course...that's pretty fucking obvious anyway) would control 2/3 of our Parliament....

You think they got the Balls to bring such amendment???

Then check out with this other guy oso

The funny thing is that it was their ancestors who brought in all the Mata Sepets as kuli bataks to dig shit out of our land....way way before the Brittish.......and it was THEM as well who brought in the Capitalist Class who now controls our Economy....

So how now.....better refer to IDEAS they got a lot of IDEAS....wonder if Wan Saiful wanna add another suggestion?


PS: For those interested in a more detailed posting on Article 153 check out my old piece SatuLimaTiga....A Tribute to Justice Hamid (here)