Death of the National Terrorist

I was hoping for more from Najib when I woke up on Saturday afternoon. I sleep late most of the times and end up having half the day gone. Before I know it was already Monday morning, can't really recall...think I did some shopping and had some shabu-shabu with green tea ice-cream for lunch somewhere in between

And guess what greeted my timeline today...of all things

What do you all think?

Ching Peng is a Pejuang Bangsa?


Chin Peng not a citizen, say police - The Malaysian Insider http://t.co/YVZTlKUY9z via. So what, Chin Peng was a national hero and patriot!
— Prof Ramasamy (@proframa) September 16, 2013

Macha on a roll folks

UMNO leaders cannot understand what is patriotism, what is anti-imperialist struggle and anti-colonialism. UMNO tool of the British!
— Prof Ramasamy (@proframa) September 16, 2013


Today is Msia day, I will spend my time thinking abt the contributions of our patriots such as Chin Peng, Rashid Mydin, Veerasenan & others.
— Prof Ramasamy (@proframa) September 16, 2013

And why do you all celebrate on 16th Sept anyway?


I wrote about it last year

In there I asked

Why are you celebrating the 16th of September?

Are you celebrating the success of Indonesia and the Philipines to derail the formation of Malaysia?

or Are you celebrating the efforts of Miri Ahbengs SUPP Commies Anti Malaysia efforts?


Go read this up (here) if you don't know why it was delayed.

Now back to this Pejuang Bangsa and Nationalist thing... 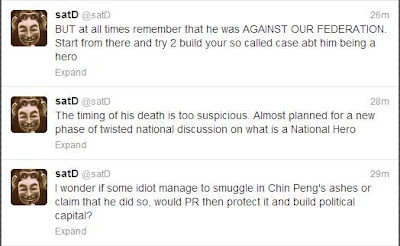 Chin Peng dedicated himself to the Communist Internationale soon after the Japanese invasion of China in the late 1930s. On the direction of the USSR, he and the CPM cooperated with the British Force 136 to fight the Japanese Occupation of Malaya. After the war, he carried out the order of the USSR to plunge Malaya into a cruel insurrection for 41 years. On the advice of his international mentor, he carefully kept the power within the CPM in the hands of its Chinese leaders. His struggle was to make us a communist satellite state - not a free country with democratic freedom to choose our system and leadership of government.

From my first day as a police officer in 1959 to Dec 1989 I was fighting CPM terrorists or subversives. In 1988, they made overtures to talk us into a peace agreement through Rashid Maidin's letter to Tun Ghaffar Baba and the Thai Army. I asked Tan Sri Rahim Noor, my Director Special Branch to clear with the Prime Minister, Tun Dr Mahathir Mohamed to accept the offer to talk peace with the CPM - although it was already a spent force so that we could put them aside and concentrate fully on our national and economic development without further distractions.

We were generous in our peace terms and allowed all the CPM terrorists of Malaysian and Singapore origins and their families to return to Malaysia provided they applied to do so within one year of signing the Agreement. About 300 ex terrorists returned but we did not sight any application from Chin Peng. I have no love for him yet would have fought for the terms of the Agreement to be honoured only because of the principle that our honour demands that we keep our side of any bargain. When Chin Peng applied many years after the Agreement to return, he had missed the boat and there was absolutely no reason to admit him unless he could prove he had applied within that one year window. This he wasn't able to do.

We have nothing to do with him now and I do not see why we should even allow his ashes in. We should look after those who stoutly fought and defeated him, particularly the families of those of all races who died or were maimed fighting him and the CPM. Those of his followers who refused the chance we gave to return to Malaysia in 1989 and 1990 should be left alone outside our country. They should not be allowed to return under the terms of the Haadyai Peace Agreement whereby we forgave them for their crimes. One of those who chose not to return was the No.1 killer of my predecessor, IGP Tan Sri Abdul Rahman Hashim. Surely we do not want him back without facing murder charges." Tun Haniff Omar (here)


I don't think that anyone needs to write a lengthy post on Ching Peng. Just start from the 80's and move backwards to justify his National Hero credentials.....no point starting from the Brittish days. Details are sketchy anyway.

Donno where to start?

What do you think folks? 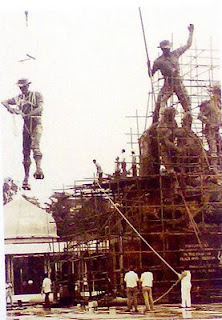 TUGU Negara or National Monument holds a special place in metallurgical engineer Hiroshi Kanamori's heart. Kanamori, 62, was part of a team that helped reconstruct the bronze-granite monument after communist terrorists blasted it with bombs on Aug 27,1975, just four days short of National Day, writes ADRIAN DAVID. It took Hiroshi Kanamori and his Malaysian team, comprising understudies with the Malaysian Handicraft Board in Kuala Terengganu, nearly two years to reconstruct Tugu Negara. They finished the job on May 11, 1977.

Recalling how he was summoned to supervise the reconstruction, Kanamori said he was at that time on a three-year attachment with Majlis Amanah Rakyat from October 1975. "My stint here was to lecture Malaysian Handicraft Board students on casting and moulding. "The Malaysian government sought help from the Japanese embassy here, who forwarded the request to the Japan Industrial Cooperation Agency (JICA). I was then called up," he said at a recent interview in Kuala Lumpur. (here)


"The point is that we are all capable of believing things which we know to be untrue, and then, when we are finally proved wrong, impudently twisting the facts so as to show that we were right. Intellectually, it is possible to carry on this process for an indefinite time: the only check on it is that sooner or later a false belief bumps up against solid reality"  George Orwell (here)