Media Statement by Dr. Ong Kian Ming on the 14th of May, 2013 in Kuala Lumpur

Apologies to Mr Chua Lai Fatt and his family On Sunday, 12th of May, 2013, I told the Chinese press that cases of foreigners being given Malaysian Blue ICs should be investigated. I gave them the example of a Mr. Chua Lai Fatt (IC: 830914-14-6763) who was registered to vote in 2011. Mr. Chua’s case was highlighted because although his name is a Chinese name and the Election Commission’s own records show that he is Chinese, Mr. Chua did not look Chinese based on his IC photo which was widely circulated online. I later found out that Mr. Chua was adopted by a Chinese family which explains why he has a Chinese name. I apologize profusely to Mr Chua and his family for this mistake on my part. I hope to reach out to Mr. Chua and his family to apologize in person, if possible. If you know how I can reach him or his family, please email me atongkianming.office@gmail.com. (here)


That was so funny dude...cheers mate!

Wanna know something else?

Every single one of you who shared that or liked that takes part in the whole "circulation" activities..

I think you all should apologise to Chua Lai Fatt too..

Wanna know something else ...they knew that a lot of folks came up to defend Chua ...and they suppress it....

BTW Folks guess who is in charge of all these propaganda shit anyway...


Remember this news folks when these 2 trouble makers joined DAP

“It is time for me to join politics and leave the sidelines of academia and as an analyst, to help bring change for Malaysia.” Ong, 37, will serve as election strategist at the office of the DAP secretary-general. He had previously assisted the electoral reform movement Bersih, as well as DAP, in analysing the electoral roll. Flanking Ong at the press conference were top DAP leaders, including secretary-general Lim Guan Eng, vice-chairperson Tan Kok Wai and national publicity chief Tony Pua. Also joining the DAP ranks today was chemical engineer Yeo Bee Yin (centre in photo) , who runs a business in social media strategy. Yeo, 29, will serve DAP as as social media strategist (here)

I'll bet my money that it was YOU WHO UNLEASHED THE CYBER LOCUST TO WRECK HAVOC on Chua Lai Fatt. A tactical move during election...totally understandable..to those in the field but not for orang biasa mate...

Or was it Ms Yeo? 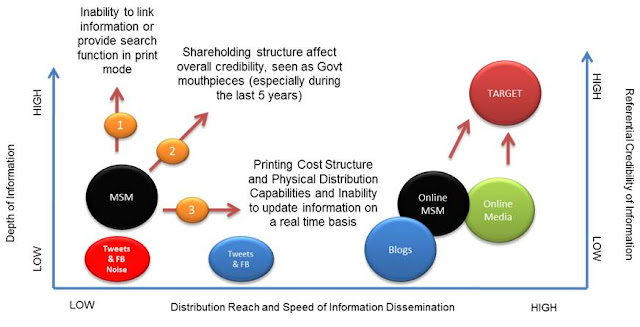 Let us start with the Depth of Information
It covers the richness of information that is being presented and also the scope of information covered eg: a Sports Portal would have much more detailed info about sports Vs a Cooking Portal. So if one is to search in a particular site that has a lot of topic and has a very good historical database then the site has a High Depth of Info.
The other dimension is the Distribution Reach and Speed of Information Dissemination
This one pretty straight forward, the more folks looking at the site (visits) or newspaper purchase activities and also how fast information gets to the users....print can never compete with Online on this matrix....
The last dimension is the Referential Integrity of the Information
This one also pretty simple......bole percaya ke tidak? Ke lu main selit petik dari langit......
This whole cyber space activities that we have been seeing over the past few years is a battle to the Top Right Corner...sepatutnya...but instead you will get very high traffic site pushing crap that is heavily skewed to either side of the fence.....for someone like me...it's pretty tiring to sift through the garbage..to find something....
Instead everyone should be aiming to be the Most Credible with the Highest Referential Integrity, Has the Highest Distribution and the Fastest one on the block and covers a wide scope of info with good historical data of news or post etc.....
You see clearly that the MainStream Media is stuck in its traditional battle...print is too costly to go big on distribution.....the shareholding issue creates a natural barrier of becoming something that is "neutral" and of high referential integrity...on depth if it is off line you're stuck with the pages on your hand....tangan pun kotor hasil pun tarak...only way to fight is online with comments section opened and build their very own online community.....
Twitter and FB on the other is full of noise......
chaos.....total chaos........
Tak percaya check out your timeline nowadays after the dissolution of parliament....
Hancus.....full of craps...one after another.....
The traditional game that I used to play will not work anymore due to the time constraint that the PRU puts everyone into...
In case you're wondering how I used to play... 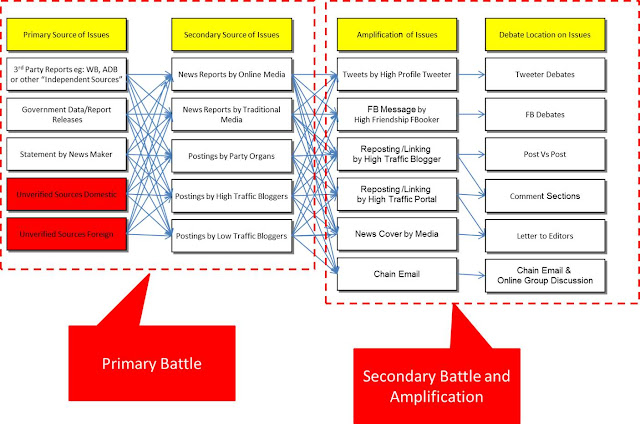 There was always two set of battles, the Primary Battle and the Secondary Battle/Amplification.....I would always aim to go to the source and fight bare fisted with my own set of data which I hope will then be picked up by someone who pulls greater amount of traffic to amplify it.
Going forward, time to read is shorter, no one is gonna be going through a long rebuttal post but instead folks will just be looking at what is presented in the most fancy way but straight to the point....langsung atas dahi bulleye level....simple....
Enter Infographics.......slick Media Files etc....
How many will be liked on FB? How many will be RT'ed on Twitter?
Is someone counting all of these...what about the Referential Credibility of the information captured in them?
Why am I blabbering about all of these...sampai berjela2 siap buat framework etc.....
Gua sebenornye tak tahan bau hancing....bersepah 2.......
Can we all focus on the Truth please..........
Or at least try to search for the most credible information....kalau lu orang jumpe benda hancing just send the link to me via FB or Tweet..will do my best to respond...
before you click on that Share or RT button ask yourselves.....benda ni masuk akal ke? or should I be a lembu like the rest and just click enter...

Both the Tukang Karut capitalised on the fact that they are in control on the Social Media Zombies and are able to shape the "perception of truth" during the election...


Today, I want to announce that upon further investigation and analysis, another 3.3million cases of doubtful voters which needs further investigation have been uncovered. Among this 3.3 million voters are: (1) 3.1 million voters whose IC addresses shows a different voting constituency from the constituency in which the voter is actually voting in.


And when asked about the migration rate and the data integrity...mengelabah nak mampus pastu belit baik

I have been asked many questions with regard to the 3.1 million potential non-resident voters which I first highlighted at a press conference together with members of the Bersih steering committee on April 23. I subsequently wrote about this issue in greater detail here. In response to these questions, I would like to make the following points: 1. That not all 3.1 million of these potential non-resident voters are dubious voters.

Sad don't you think if folks with a Pee Hech Dee are suddenly put on a pedestal and all the crap they say is the holy grail.....tak bole belah doe...baru cucuk sikit dah terkencing celah kangkang....

To me this Synonym Taichi Fella has a lot more explanation about his role in the Chua Lai Fatt incident..

What kind of role do I see myself playing within the DAP?

I remain committed to the issues which I am passionate about and will continue to highlight issues pertaining to electoral reform, education policy, decentralisation and other aspects of economic policy. Thankfully, I will not be alone as I will have the opportunity to supplement and complement what other DAP leaders have said on these issues. If the opportunity arises, I will also highlight other policy-related issues which are timely and important but which I feel sufficient attention has not been given to. I will also continue my work as an elections analyst to provide insights and analysis to the DAP. It will be an interesting learning experience as I navigate the demands of being a member of a political party and to make whatever contributions I can to the DAP as a member. I will obviously have to give up my “hat” of a political analyst but it is a small sacrifice to play in the larger scheme of things. I look forward to the new challenges that are coming my way and I am excited about the prospects of playing a small but hopefully meaningful role in the context of bringing about positive change to our country as part of the DAP. (here)

Look forward to more of your "positive" contribution to our Country......