Income and Wealth inequality is a long standing problem. It is harmful to society in various ways that one can imagine. Allow me to share with you a Social Epidemiologist take on the subject matter rather than an economist view point.

Please spend the next 15 minutes to watch this TED Talk by Richard Wilkinson, Co-Author of the Spirit Level (2010), a book that raised a lot of eyebrows simply because the statistical observation apparently didn't meet the technical scrutiny (here). Both the Authors responded to all their critique and launched The Equality Trust (here), a social movement with a goal to improve quality of life in the UK and reducing economic inequality.

Fast forward to 2014, when the Non French speaking people of the planet finally got their hands on Capital In the 21st Century by the French Economist Thomas Piketty.

The voluminous book central idea lies in this chart

Monkey love the time series data captured in the book...and as usual folks will try to find every little tiny excel errors(here)

What's wrong with these people can't you not validate your excel properly.

Perhaps we should send the Nation's Excel Validator Dr Ong Kian Ming who did a great job with the DAP Elections.

Anyway folks, today's post is not about the Global Problem of Inequality.....it is about my search for Brader Melayu with Balls and Brains (here)....guess what...monkey found another one folks

This gentlemen first came into my radar after his study on Racial Discrimination in Hiring went viral :“Does race matter in getting an interview? A field experiment of hiring discrimination in Peninsular Malaysia” (here a review by Hishamh of Economics Malaysia) 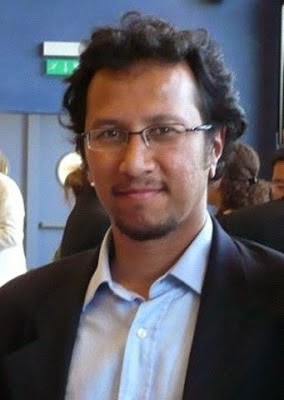 Enter the French trained Economist Dr Muhammed Abdul Khalid, a kindred spirit who empirically trashes Tony Pua's "The Tiger that Lost its Roar" during the launch at Bandar Utama while representing his boss from ISIS.

I was introduced to him by Bro Hishamh in 2012, we interacted online till I finally had to opportunity to meet him in KL....it was a pleasure indeed to know such a bright young Malaysian...otak gile sharp dowh...bole cakap Perancis lagi beb 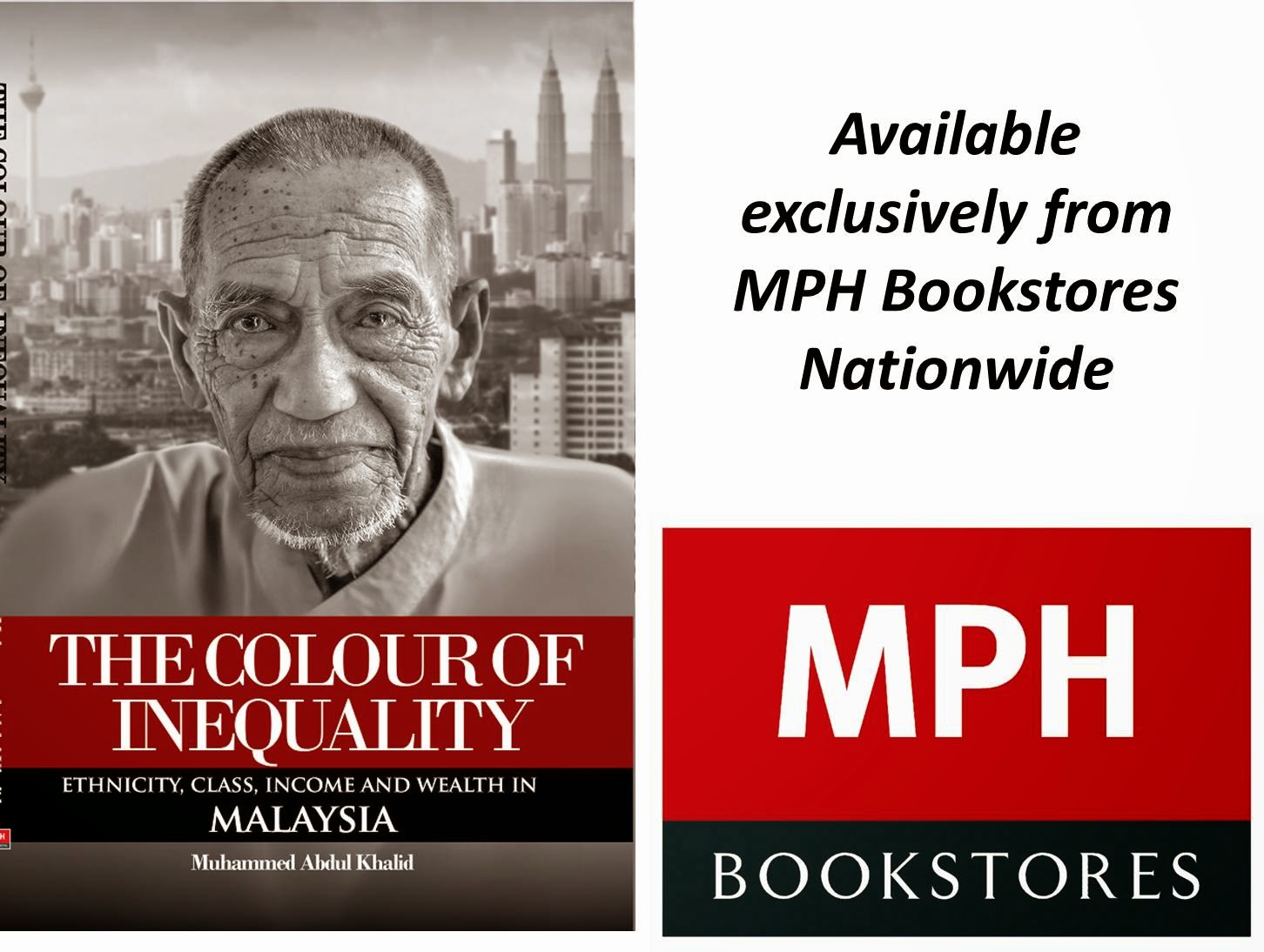 Monkey had the privilege of an advance reading of the Color of Inequality, first the pdf and then his signed copy......

Anyway my intention was to write a review but at the risk of exposing the explosive data captured in the book I shall refrain myself and Gua ni sape la nak kasi review...instead I shall quote the foreword by Tan Sri Professor Emeritus Dr Just Faaland, the then Director of Harvard University Advisory Services Malaysia Project, is one of the key architects responsible for the formulation of New Economic Policy in 1971

Dr Muhammed’s book is a landmark contribution in the history of the economic and social development of the country. It specifically and systematically addresses one aspect of the overall serious socio-economic inequality problem in the country: wealth inequality, although the analyses also include inequality in income, employment, and education. It is a well-researched book, emanating partly from Dr Muhammed’s doctoral dissertation from the elite grand écoleSciences Po Paris. His attempts on policy prescriptions on how to go forward towards solving the problems, without impinging on minority rights and retard the momentum of sustained economic growth, is worth exploring. It points out some of the alternative ways on how to contain the wealth inequality gap for national interest, over sectarian consequences.

I want more......given the fact that some of the observations itself is a dedicated subject matter worth investigating further...

Take Education for instance....to me this is core and we must start from the outset and not try to correct the imbalances later in life

Why do I say this?

Being a parent I see this happening, the division between the haves and the have not....proliferation of Tuition Centers, Private Schools will only widen the gap that Muhamed has observed in his book....

I sincerely hope that this book will be well received by the Policy Makers who are in-charge of our economic development as there are many hard truths that needs to be confronted and dealt with precise intervention policies to ensure that the rising tide lifts all boats.

I also hope that both side of the house can be UNITED in the interest of all Malaysians and undertake a firm commitment towards supporting an EQUALITY PLEDGE as how the UK MPs did..(here)


DO NOT LET THE INTEREST OF THE CAPITALIST CLASS CLOUD YOUR JUDGEMENT! 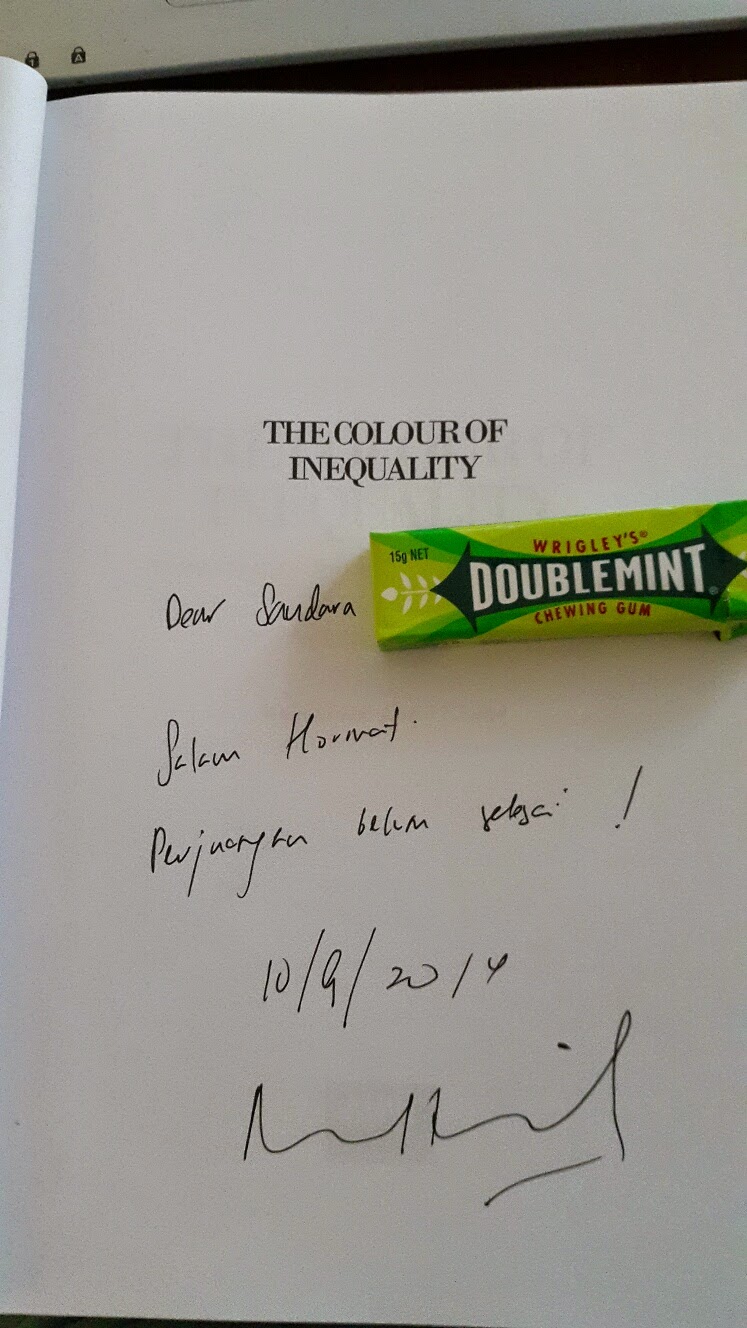 Bro Muhammed this perjuangan must be mobilised into a movement that is color blind and cuts across class. I hope that the initial seed is planted for generations to come. You shall have me on your side in any battle my brother...insyallah.