Over the past 2days since I put up the bounty of Kiram Madefaker...folks have been contacting me privately saying that they would want to contribute further....

Last count commitment is already in excess of 200K

Some even suggested to collect money.....

For a sample check this discussion out (here)

I received a call from a concerned family member who advised me to pull out the post....

Too late I said....it's already all over the cyberspace..

Some were positive...some thought I was childish etc etc lah....lantak pi la beb as if your opinion matters to me

I was pretty surprised when Malaysian Digest picked it up yesterday......siap buat own interpretation pulak tu beb

KUALA LUMPUR: A Malaysian blogger has offered a reward of RM50,000 for the head of the self-proclaimed Sultan of Sulu, Sultan Jamalul Kiram III today, following the killing of eight policemen in Sabah by his followers since Friday. Blogger SatD said he would forked out his own money and award anyone able to execute Kiram. "As a Malaysian citizen, I would like to take matters into my own hands now after a citizen of another country sent his 'loyal troops' into our jurisdiction and waged terror on our soil," he wrote in his blog, http://satdthinks.blogspot.com.

The blogger said the attack in Lahad Datu should not be described as an act of war by another nation but a terrorism act by "a bunch of idiots, led by another idiot (who is) under (the) command of another idiot". "If the Philippines does not extradite Kiram to face the necessary charges under our law, then I will now initiate a bounty on his head," he said. “I shall start with RM50,000 of my own money. I'm dead serious,” he added. SatD also urged his readers to spread the word and obtain more funds for the reward.


In the meantime, SatD also lambasted PKR vice president Tian Chua for his recent comments on the Lahad Datu intrusion and offered RM5,000 for anyone willing to slap the MP. “To claim... send in a video of you doing it,” he wrote. Meanwhile, Rocky Bru said SatD’s sentiment was a reflection of how ordinary Malaysians felt about the intrusion but cautioned against those who wanted to take up the offer. “Malaysian should not risk their lives trying to put down Kiram. Instead, lets get Wisma Putra to demand Manila to arrest Kiram for ordering the terrorist acts on Malaysia,” he said in his post today. - mD (here)

Actually it was Rocky who said that...

Btw, SatD is also offering RM5k to anyone who can give Tian Chua a tight slap (here)

What I said was


Oh and another 5K for someone who is willing to go give that kurang ajar AhBeng suka gigit polis a slap in the fucking face.....to claim send in a video of you doing it

Kiram gua takde hal as if he's gonna ask the Philippines government to extradite me for putting up a bounty over his head....

Anyway folks if you remember my message in the previous post....

If Philipines does not extradite Kiram into our jurisdiction to face the necessary charges under our law, then I will now initiate a bounty on his head.


There is a condition precedent to the offer....

Let us now go into the possibility of extraditing Kiram

Extradition requires a key condition to be fulfilled


The situation that we have with Kiram is that he is not the one who is pulling the trigger.....

His troops are....with clear instructions from him...

Till the last drop of blood... apparently

KUALA LUMPUR: The "Royal Sulu Army" on Malaysian soil will not give up the fight, a spokesman for the purported Sultan of Sulu Jamalul Kiram III said. Ahmad Idjirani was quoted by several Philippine media as saying they would fight "till the last drop of blood". (here)

So what crimes has these bunch of idiots commit?

PETALING JAYA: Malaysia can seek the extradition of self-proclaimed Sulu Sultan Jamalul Kiram III from the Philippines to face the law over the intrusion into Sabah, legal experts said. They said Malaysia’s arrest and extradition of Moro National Libera­tion Front leader Nur Misuari to the Philippines in 2001 following a request by that country had set a precedent for cooperation in dealing with such cases. Muslim Lawyers Association of Malaysia Datuk Zainul Rijal Abu Bakar said the culprits, including those based in Philippines such as Jamalul Kiram, needed to be brought to Malaysia to face criminal charges of waging war against the Yang di-Pertuan Agong, an offence under the Penal Code that is punishable by death upon conviction.

“Our sovereignty has been challenged and while Malaysia wanted to avoid bloodshed they started firing, triggering action which resulted in our security personnel dead, which means there is no more room to forgive them,” said Zainul. He added that since Jamalul Kiram did not directly take up weapons in Malaysian territory, he could be investigated for abetting to wage war, which also carries the death penalty upon conviction. International Islamic University Malaysia (IIUM) Associate Professor Shamrahayu A. Aziz said the charge could be used against the culprits even if they were not Malaysian citizens because what mattered was where the crime was committed. “It is also possible for Malaysia to request the extradition of a person who is not in our country if we can prove that the instructions came from him or that he instigated or incited the actions,” she said (here)

Waging a war against the Agong?

Is that even applicable to Non Malaysians? 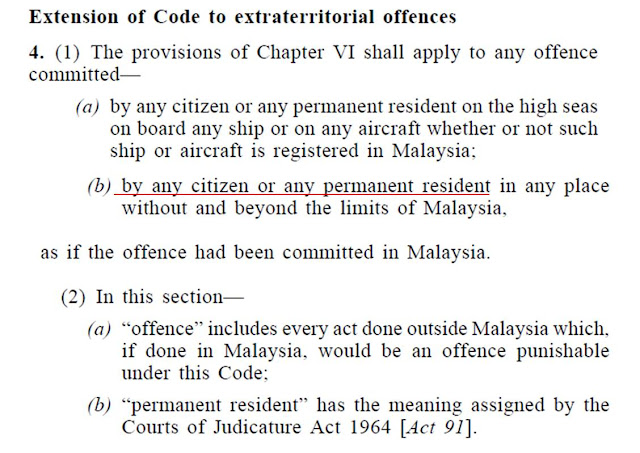 Let us go to something more simpler...


The murder of eight police personnel is among charges which the armed foreign intruders in Sabah would face, said Minister in the Prime Minister's Department Datuk Seri Mohamed Nazri Abdul Aziz. (here)

How to link Kiram...what clause under our code and Philippine's code can fulfill the "Double Criminality" conditions?

On our side we have Chapter V Abetment


The AG has spoken

KUALA LUMPUR (Bernama) — The Attorney-General’s Chambers (AGC) will seek a request for the extradition of Jamalul Kiram III from the Philippines, should a case be made against him, said Attorney-General Tan Sri Abdul Gani Patail. He said his office had been looking into the matter (extradition) since last week. “The most important thing is that the investigation on the matter by the police must be completed first, a case must be made against a person before a request for extradition,” he told Bernama when contacted here today. The top man in the prosecution office explained that a case must be made against a person before the AGC decided to take any action, such as extradition or charge a person. He also advised the public to enable the police to carry out their duties to investigate the case. “If there is a case, definitely we (AGC) will go for it (request for extradition),” said Abdul Gani when asked to comment on media reports in relation to extraditing Jamalul Kiram for allegedly executing the armed intrusion into Sabah, which left eight policemen dead. — BERNAMA (here)

Now back to my bounty

So that we can say to the Sulus......look at your "Sultan" terperuk dalam jail doe

Lu mau buat report polis go ahead.....you will have to prove that you are an Ah Beng who suka gigit polis...