The Outing of the Insider Auta

Let's get a bit technical on this shall we.

AVoice says SC should throw the book at them (here)


Big Cat wants a goreng version of them (here)

Rocky says Ranjit will be coming down hard...(here)


How hard can it possibly be?


KUALA LUMPUR, Aug 10 — In a volte face, the Securities Commission (SC) will now order Sime Darby Bhd to make a general offer for Eastern & Oriental Bhd (E&O) shares after buying a 30-per cent stake last year, say government sources. The Malaysian Insider understands the decision was made after a review by the leadership under new SC chairman Datuk Ranjit Ajit Singh. “The SC has reviewed the matter and decided to overturn the earlier decision made when Tan Sri Zarinah Anwar was the chairman,” a government source told The Malaysian Insider.(here)


Insider should have verified it with the proper authority as this is definitely a price sensitive information.

They decided not to. Wonder why?


A decision by a Regulator in-charge of the conduct of Capital Market activities should not be leaked (if it is true) to the media prior to a proper announcement.

In this case however, SC came out to deny it promptly with a follow up by Bursa on the Unusual Market Activity for the Security.

PETALING JAYA: The Securities Commission (SC) has maintained that Sime Darby Bhd does not need to make a mandatory general offer (MGO) for shares in Eastern & Oriental Bhd (E&O). “The SC's position on the MGO requirement in the Sime DarbyE&O share acquisition remains unchanged as per the SC statement issued on Oct 11, 2011. The decision is now subject to judicial review which is pending in court,” it said in a statement.


The statement was in response to an online news portal which reported that the SC would order Sime Darby to make a MGO for E&O shares after buying a 30% stake in the latter last year. The report, citing Government sources, claimed that the decision to order the MGO was made after a review by the leadership under new SC chairman, Datuk Ranjit Ajit Singh.


Securities of E&O surged in active trade yesterday on the news portal's report, resulting in the company's shares rising 42 sen to close at RM1.90 with 44.74 million shares done, while its call warrants E&O-CA jumped 16 sen to 16.5 sen. The company was subsequently issued with an unusual market activity (UMA) query by the stock market regulator yesterday.


In its reply to the local bourse, E&O said there was no corporate development that would account for the UMA. “After making due enquiry of our directors and major stockholders, the board wishes to inform that there is no corporate development relating to the group's business and affairs that has not been previously announced that may account for such unusual market activity.” In its statement yesterday, the SC added: “There is no change to the decision of Oct 11, 2011 pertaining to the Sime Darby-E&O GO and there is a judicial review which is pending in court. “The SC has begun an examination of the trading associated with the relevant counters arising from the rumour.” (here)


The stock did move on that news. So someone was induced to purchase... 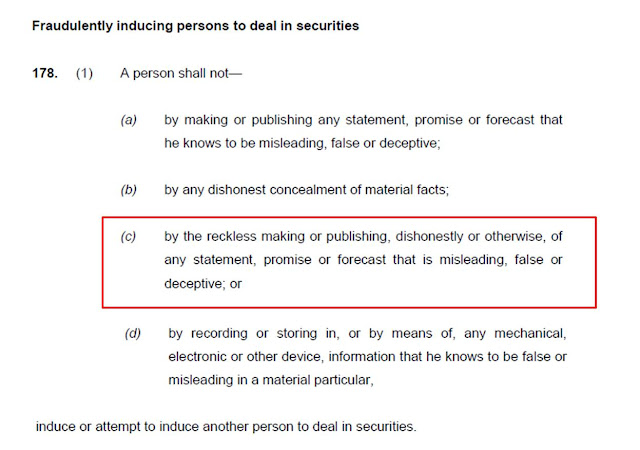 Does that validate that the news was false?

If you are wondering what the Insider will be facing

So will the chubby chub chub editor

on who the "Government Source" is?


Here's the thing about enforcing Securities Regulation in the cyberspace....first they need to be fast as the market is moving at breakneck speed in terms of information processing capacity. Investment decisions are being made no longer at split seconds but a smaller fraction than that... all driven by algorithms that takes away emotions of the trader and focuses on news that can trigger positive or negative movement of a particular security. Information gatekeepers such as analyst, rating agencies and the media need to abide by a very strong code of ethics in order to deliver the information to the general public...that we know fails regularly...


BTW I hear quite a lot of folks have left the Insider...

Worry not you're in far bigger shit now... better start deleting those hardisks and your mobile phones records

To the SC I hope that precise communication records (emails, Social Network Public & Direct Messages, BBMessenger...etc) 24hours prior to the piece being published has been acquired.....

How's your Ramadan so far?