The Elephant in the room: Chinese Education Rally

Dongjiaozong doesn’t stand alone; it stands as a legal and an institutional bulwark against Malay conversion; it makes no demand from the Malays but only for the Chinese to be free from the Malays. Dongjiao is representative of the Chinese identity that’s embedded in their schools and their language. Dongzong‘s demand from the DAP that the latter clearly state its Chinese position will continue to be met with silence (here)

Is that fact or another Urban Legend sista?

Perhaps we should all take a walk down memory lane... 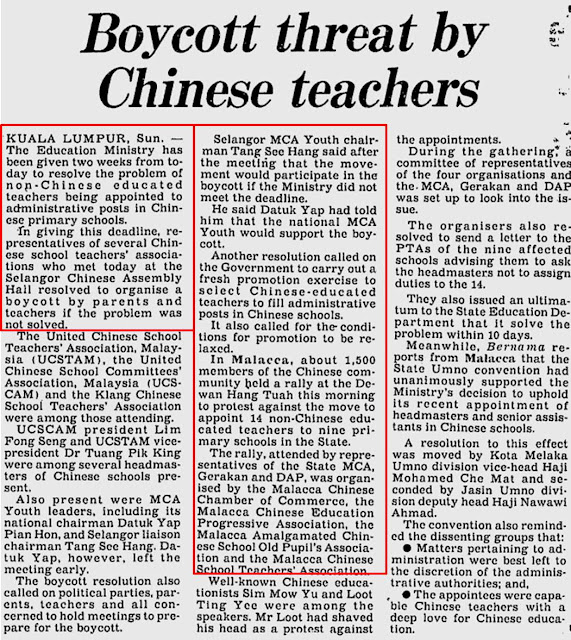 Let me ask you a question

Do you think that this Non-Chinese Educated Teachers were Non Chinese or Chinese? 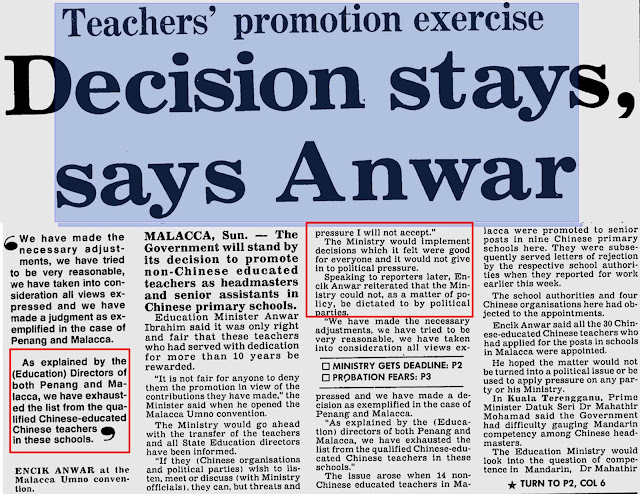 So what you make of that stupid vernacubeng statement that

Dongjiaozong doesn’t stand alone; it stands as a legal and an institutional bulwark against Malay conversion; it makes no demand from the Malays but only for the Chinese to be free from the Malays.

Only for the Chinese to be free from the Malays????? Biar betik

You sure you don't want to add Chinese to be free from Chinese who have poor command of Mandarin?

How bout the Urban Legend Blogger? You sure about your "Siapa Lagi" statement?

The Chinese Education system face a serious problem in having a constant supply of well trained educationist to meet the growing enrollment, it was a problem then and is a bigger problem now.

Soon they will request to import straight from Mother Land....

To me the Chinese Education System itself is a problem to the Government.

I want to bring back something from an old post...remember the Merdeka University Judgement?

This time let us look at the single dissenting judge

A Chinese of course...

He tried hard to justify his dissent to the Judgement by Lord President Suffian, Raja Azlan Shah the CJ and two Federal court judges Salleh Abas and Abdul Hamid (here)

In any event, bearing in mind the history of education in this country and the divisive results of allowing separate language schools and the lesson learned from the experience of our neighbour with a private university and the determination of Parliament to so regulate schools and universities and education generally as an instrument for bringing about one nation out of the disparate ethnic elements in our population, we have no choice but to hold, as we have already held, that MU if established would be a public authority within Article 160(2) of the Constitution and that accordingly teaching in Chinese there would be use of that language for an official purpose, which use may be prohibited under Article 152. As there is no right to use the Chinese language for an official purpose, accordingly in our judgment it was not unconstitutional and unlawful of Government to reject the plaintiff’s petition to establish MU. We would therefore dismiss this appeal with costs.

This was his point of view

What is the "Official Purpose" of a Public Authority?

The controversy around this Article is this: Mr. Beloff contends that the Article prohibits the use of Chinese for official purposes, but not for unofficial purposes, that as “official purpose” is defined by cl (6) of Article 152 as meaning — any purpose of the Government, whether Federal or State, and includes any purpose of a public authority; and as public authority is defined by Article 160 (2) as follows: [It] means the Yang di-Pertuan Agong, the Ruler of Yang di-Pertua Negara of a State, the Federal Government, the Government of a State, a local authority, a statutory authority exercising powers vested in it by federal or State law, any court or tribunal other than the Federal Court and High Courts or any officer or authority appointed or acting on behalf of any of those persons, courts, tribunals or authorities;

Let us now go to the current Education Act 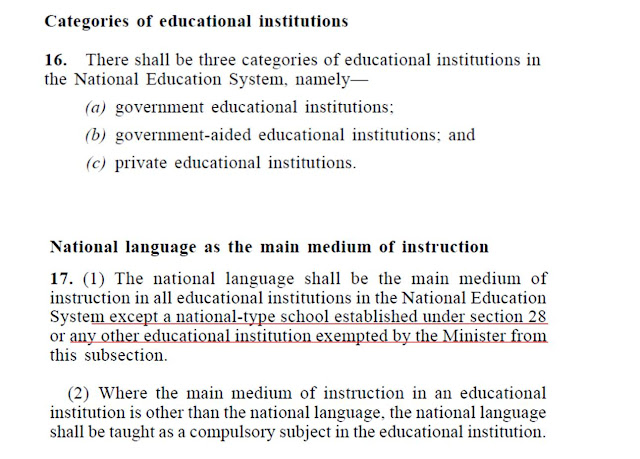 When you execute your duty vested under Act 550 to provide Primary Education in Government and Government Aided Primary Schools are you doing it as an Official Purpose or saja suka suka?

If you are not sure go ask the Attorney General....I hear he's pretty good at spotting Elephants

Like I said before to the stupid Dog....keep your schools just don't ask the Government to pay for it.(here)

They also say that Culturally all of this needs to be inculcated at a very young age...

I wonder why all of this cannot be executed in our National Schools with dedicated sessions for Mandarin or Tamil together with Cultural Specific Subjects, World Religion etc with Additional Government Tutors (Current Vernacular School Teachers) to assist those who are slow in learning other subjects in our National Language to be tutored in their mother tongue.

And I also wonder why our Government does not want to set up a Dedicated MBA Program in our universities to teach students about Chinese Culture and Ethics, Overseas Chinese Network and the Confucian Values in Doing Business wouldn't that be more strategic to equip our resources?

The way forward is Regional Integration envisaged under the Asean Economic Community Blueprint (here)..Mainland China is just one of the markets that we need to deal with..you think you can come down to the ASEAN cities to deal with Overseas Chinese Business armed with Mandarin only?

Got to move forward people.....that Elephant is planning to shit big time on the 25th of March

BTW Ketua Pengangkang YB Permatang Pauh I hope you can clarify if you had transferred any Non Chinese that triggered the protest in 1987?