To the stupid ahbeng called anomie

I didn't want to have a new post yet but one idiot came in trying hard to sound smart la kononnye....

this is what the idiot said...(in red)...
“But.. but, what about from the angles of semantics & pragmatics?"

“So let me put to u that M Abdullah being a learn man of letters, correctly ‘translate’ the TRUE description of the super being by using Allah, from his understanding of that meaning as bounded by the theory of Triangle of Meaning. No?

If you are serious about debating me on this matter you would have lifted that tangan berak calit of yours to key in words like Sejarah AlKitab and you would have found this particular piece
Go to page 7 of 11 or 48(in the actual picture) where it is mentioned that the 17 year old Munshi finds that Liedekker translation of the bible was unacceptable. Munshi also “referred”(or was made to?) to the Dictionary of English-Jawi made by none other than William Marshden who came to Sumatra in 1771 and left for England in 1779 and published the Dictionary 1812....not only that he was not happy with the use of Malay and also Christian terminologies such as "Anak Allah"
(note: this is a contextual translation of Bahasa Indonesia for those who went to Vernacular Schools and tak paham sepatah haram Bahasa Malaysia)


if he was not happy then something is not right with his triangle la dude
oh one more thing pek.....itu Marshden 8 tahun duduk sini sudah boleh bikin kamus ka?

Worry not folks this professional googler have found the said document.... 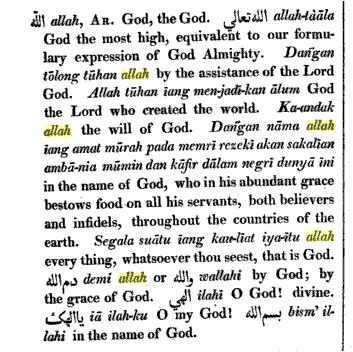 All of you may go here to have a look with your own eyes the actual document .....thankyou Google!!!
I wanna ask you all who are reading this post which Allah is that in Marshden's dictionary?

Who is the mukmin and who is the kafirs that he is trying to imply in the description?

My wife and me have a strange feeling that some Biblical concept was introduced right there....sorry girls I'm happily married with 3 lovely kids :)

Again i ask can a 17 year old Abdullah argue against a Dictionary made by Raffles personal buddy?

Anyway folks after reading that link above you may notice (or not) but I shall point this out to you........

Then Raffles, in the large generous way in which he ever did things, told Marsden that he had by him a sketch of a grammar, which he would send his as soon as he could correct and copy it, and added that he was gradually compiling a dictionary, and that he was welcome to it, if it could be of any service to him
Raffles to Marshden March 1809

Who's dictionary is it now?

If you all wanna know what Raffles thinks of Islam.....check this out

Conflict of Interest don't u think? 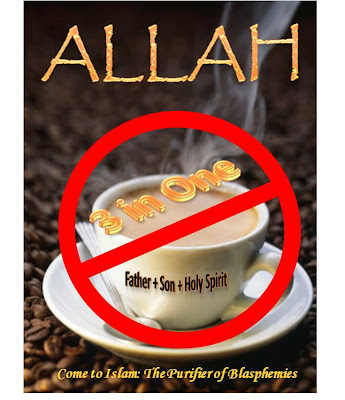 But...but(apek gagap style) my formula only got one......you got 3 ....how la Marsden wea got equivalent one
anyway anomie thiunyaseng to your mumma n papa for giving birth to such a stupid malas idiot like u 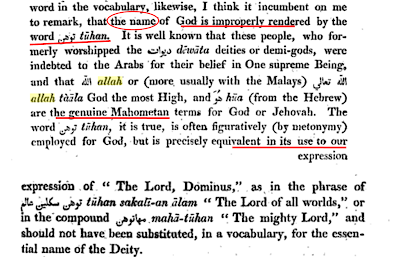 Lu pakai spek mata ape tulis ini dictionary pakcik?
Since u folks are introducing a new God to the people down here....why didn't you introduce us his name....I would love to get to know him/his son and what ever spirits that came along with him as well....instead of pinjam ours.....
And why didn't you add these words next to the definition of Allah = Unique Name of God for Muslims.......

Lupe kot?
He concluded his introduction with this message

Si quid novisti rectius istis,Candidus imperti, si non, his utere mecum.
If you know anything better than this candidly impart it; if not, use this with me.

Well ....this monkey may be 198 years late.......but hope u're reading this in hell
Another Shiite by satD at 12:25 AM
Email ThisBlogThis!Share to TwitterShare to FacebookShare to Pinterest
Newer Post Older Post Home
Minds are like parachutes; they work best when open. -Lord Thomas Dewer